TEAMSAM was established after the unexpected death of PA Member, Salvatore “Sam” Drogo in September 2010. TEAMSAM walks in memory of Sam at the Heart Association’s Americas Greatest Heart Run and Walk to raise funds to be used for research related to procedures and medication used to fight heart disease. 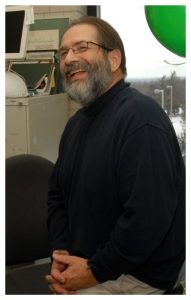 Sam’s career at MVCC began in 1974.  Prior to having received tenure, Sam’s recognized the important work of the PA and its role in the college structure.  In fact, at one point the PA held an “informational walk” (polite, union term for a picket because we can’t formally picket as public employees) and Sam was walking along with fellow PA members in front of the then-college President’s residence.

From former PA President and Retiree, Bill Perrotti  “In the whole history of the Professional Association, no one was more involved over an entire career in the most sensitive and important work of the union than Sam. Interestingly, he was never president. In fact, he always shunned the spotlight. His impact was less public and took the form of active and inspired involvement in the workings of the Grievance Committee as member and chair, on the Negotiations Team as member and chair, and as a discreet and trusted advisor to most of the PA presidents who filled that role from the time he was hired until his sudden death in September 2010.

Thinking back, I have a vivid memory of a conversation we had in his office in the late ‘70s. We were both assistant professors at the time and it was around the time I was first considering getting involved with campus governance. He told me that, looking forward in his career, he had decided to steer away from collegial committee work. Rather, he planned to satisfy his collegial obligations by participating in contract negotiations and grievance work for the PA. He said there was nothing he could do that would be of more service to his colleagues than that important union work. And he lived by that for his whole career with impressive results.

It seems appropriate at this time to share some details of which most of our newer members and probably many of our more senior members are unaware. Remember that Sam’s genius was in the areas of bargaining (negotiating) and contract enforcement (grievance).

Let’s take negotiating first. While nothing in our contract is the product of a single individual’s work, it’s pretty hard to find an article in our collective bargaining agreement that doesn’t somehow bear Sam’s mark. For instance, the College cannot arbitrarily change our health insurance coverage. Huge! That one sentence (codified in our contract) has saved us from a number of attempts to lessen our coverage and it will surely continue to protect us in the future. You can thank Sam. Members and their dependents now enjoy free tuition for taking classes here at MV. You can thank Sam. There was a time when only faculty could teach overload. Now faculty and non-teaching professionals do. You can thank Sam. Once the assignment of overload was a much more arbitrary process. Now with priority for two overloads, no one gets a second assignment until everyone who is qualified and has requested overload gets one. You can thank Sam. Newer faculty and staff now can earn (in real dollars) in just one-half to two-thirds the time the salaries that senior faculty and staff are currently earning after long careers. Again you can thank Sam… for the strategy that increased the minimums, for the increases and gradations in promotional stipends, and for the way those increases are calculated to maximize the monetary benefit to members. We enjoy a progressive discipline policy that requires the administration to adhere to a definite set of rules that gradually escalate in a predictable fashion. You can thank Sam. At one time promotions could be denied with little reason provided. Now the College must provide reasons for denial so those denied have a clearer understanding of what they must change in order to successfully apply in the future. Once again you can thank Sam. Bereavement leave and personal leave. They don’t seem like big deals but they didn’t always exist. Now they do. You can thank Sam. We accrue vacation time and sick leave at a pretty fast rate and we are able to donate some of our accrued sick leave to members in need. At retirement, our accrued sick leave earns us money with which health insurance premiums can be paid. And again, say thank you to Sam. There’s more, much more, but you get the picture.

Sam’s grievance activity on behalf of members and their rights is the stuff of legend. With the exception of his first few months as a faculty member, he was somehow engaged in dealing with grievances for virtually his entire career. As chair when approached by a member who felt he/she had been treated unfairly by the College, Sam’s simple reply was, “Let’s see what the contract says.” If he saw a violation, he pursued it with quiet vigor. His approach was always impersonal, always objective, always wise and more often than not yielded a positive outcome. If he had a flaw, it was that he did too much of this work himself, but he loved it. So again, we should thank Sam.”